In May 1863, Comstock miners initiated efforts to form an association. The following year, the Storey County Miners’ League became the first sustained attempt at unionization of miners in the American West.

Organized during a local depression, the League called for a $4 minimum daily wage for underground work and demanded “closed shops,” insisting companies hire only union members. Mine owners crushed the incipient movement on the Comstock by blacklisting union members and relying on territorial governor James Nye to use military force.

Of Gold HillSome of the most profitable mining ground was never on the market. It belonged to a closed corporation, usually one man, and it was not for sale–like the twenty feet of L. S. “Sandy” Bowers in Gold Hill. It yielded a total of about one million dollars and gave him a good income, though nothing like the, fantastic $70,000 a month of popular report. Adjoining Bowers was the Plato claim of ten feet, also the property one man. In September, 1863, Plato declared the record dividend of the Territory, $1,335 per foot, a tidy monthly total of $13,350, which the owner did not have to share with any stockholders.Editors remonstrated against witless plunging, and humorists satirized it. One ironist invented imaginary claims called “The Rising Moon,” “It’s All in Your Eye,” “The Captain Kidd,” “The Freeze Out,” “The Nip and Twitch.” Dan De Quille had one of these that he named “The Pewterinctum.” Another wit, in “Advice to a Verdant Stock Operator,” said solemnly:”If I was in your place and thought the Baltic was going up, uld hold on; if I thought it was, going down I would sell. As a general rule in stock operations, buy at the lowest pricesell at the highest; get all you can and keep the money. I have sold my Baltic, and am sorry for it. I have plenty of er stocks on hand, for which I am also sorry… I think the Baltic is a good mine if it only pays dividends. There are two kinds of mines-those that pay dividends and those that require assessments. The dividend-paying mines are generally considered the most desirable to hold.Neither raillery nor serious reproof slowed down maniacal feet-trading in Virginia. All booms induce aberration, but this Washoe performance proceeded with utter disregard for reality. At the time only three mines were paying dividends: Gould & Curry, Ophir, and Savage. Most of the others were levying assessments, and no outside claim had shown any sign of becoming a paying one. Yet the hope of buying into a bonanza obliterated these hard facts and produced behavior as zany as the most hysterical-boom ever saw. The shrewd ones made money, as they usually do; the unskillful, who held on too long, lost their shirts. But that is an old story.The rapid increase of population pouring over the moun- tains from California made new buildings so much in demand that as soon as a foundation went down, the owner put up a sign: “This building is rented.” A shortage of living quarters jammed hotels and lodging houses, skyrocketed the price of real estate, and boosted rents. A good-sized house for a family, or a suite of elegant bachelor rooms, rented for as much as $250 a month; small wooden stores, $300-$500. The owner of a lot with a twenty-nve-foot frontage refused $12,000 for it. High freight rates on furniture and provisions brought over the mountains made the cost of living’about twice that of San Francisco: a home-town economist estimated a minimum of $100 a month for each adult, $30 for every child. Home life was rare, all bachelors and many families sleeping in rented rooms and eating in restaurants, where board at $12 a week was the rule in the few places fit for ladies. But nobody grumbled much about crowding or inflation. The prevailing maxim was: “Go for it while you can.”

“I secured a place in a nearby quartz mill to screen sand with a long-handled shovel. I hate a long-handled shovel. I never could learn to swing it properly. As often as any other way the sand didn’t reach the screen at all, but went over my head and down my back, inside of my clothes. It was the most detestable work I have ever engaged in, but it paid ten dollars a week and board — and the board was worthwhile, because it consisted not only of bacon, beans, coffee, bread and molasses, but we had stewed dried apples every day in the week just the same as if it were Sunday. But this palatial life, this gross and luxurious life, had to come to an end, and there were two sufficient reasons for it. On my side, I could not endure the heavy labor; and on the Company’s side, they did not feel justified in paying me to shovel sand down my back; so I was discharged just at the moment that I was going to resign.”

Always on the look out for the rich finds, when word came about the rich silver finds in Nevada , Hearst went to investigate in 1859. Obviously impressed, he sold his share of the LeCompton Mine and bought a one-sixth interest in the Ophir Mine in what is now Washoe County.  The mining camp that sprang up around the mine was first called Ophir, before being changed to Silver City, then Virginia City. Moving to Virginia City, he focused on solving the problem of separating silver and gold from the ore.  In March of the next year, when the first silver was smelted from the Ophir, it touched of the “Washoe Rush” as thousands of miners flocked from California to Nevada . Soon, the entire region was referred to as the “Comstock Lode.”
It seemed that everything Hearst touched literally turned to gold. Though he didn’t fit the mold of a millionaire industrialist very well, there was no doubt that he was well on his way to becoming an even more powerful and successful man. Remembered as “almost illiterate” and having a taste for poker, bourbon and tobacco, these traits obviously didn’t hold him back. His manner and dress were often described as rough, disheveled, and crude, as he appeared in dirty and wrinkled clothes at board and miners’ meetings alike. In addition to his many mining activities, Hearst had been continuously acquiring land in the west, especially in California, and also substantial ranching and livestock interests.
As his career was peaking, Hearst received word that his mother was ill and returned to Missouri in June, 1860. Spending most of his time with her until she died in early, 1861, he met a young neighbor and school teacher named Phoebe Elizabeth Apperson. Enchanted with the 19 year-old girl, her parents were not so happy, believing that he was much too old for her. However, the two eloped on June 15, 1862 and the two soon headed to California, where they lived at the Lick House in San Francisco, a famous hotel of the time. A year later, the couple had a son on April 29, 1863 – William Randolph Hearst. As George continued to deal with his various mining interests, Phoebe remained in San Francisco.
Though Hearst had no political experience, he was nominated to the State Assembly and won a seat representing San Francisco as a Democrat in 1865. During his two years in office, he acquired the 48,000 acre Piedra Blanca Ranch at San Simeon, California and later bought several adjoining ranches that would later become the site of the famed Hearst Castle.
Two years later the prosperous Ophir Mine began to decline and it was thought by some that the Comstock Lode had finally been exhausted. Hearst returned to San Francisco to look after his real estate investments and began to apply his mining expertise to assisting the value of prospective mining ventures. Traveling all over the American West, he received high fees for his services and sometimes invested his money if the prospects looked bright enough
++
Hearst arrived in Grass Valley and Nevada City in October 1850 just as the quartz strike was made at Gold Hill. Hearst and the Clarks had better luck in prospecting in Grass Valley and by 1851 Hearst was part owner of the first theater in booming Nevada City. Hearst continued his prospecting and discovered a rich gold bearing quartz ledge between Grass Valley and Nevada City. (He named his new mine Merrimac Hill after the river that flowed near his boyhood home in Missouri.) It was exceptionally rich and was to become the foundation of his fortune. Quartz mining was a new process in California in the 1850s and Hearst’s experience in lead mining gave him an edge over others who had only their placer mining experience to guide them. He quickly set records in developing new ways to extract gold from the quartz and just as quickly developed a reputation as a capable miner.
After the Merrimack hit water at thirty feet mining was temporarily halted, but Hearst had already found another rich mine – the Potosi, not far from the Merrimack. (Potosi was named after a lead mine by that name in Missouri.) In 1851 Hearst used proceeds from the mines to establish a general merchandise business in Sacramento. “Hearst and Company” did not do well financially and that winter Sacramento flooded. Hearst decided that he did not want to keep store and he did not want to live in Sacramento. In the spring of 1852 he closed the store and headed back into the mountains. Hearst sold both the Merrimac and Potosi and realized a considerable profit. For the next five years Hearst and the Clarks engaged in locating mines and selling them for a quick profit. They did very well financially. In 1857 Hearst located the rich LeCompton Mine near Nevada City. (The mine was named in honor of Missouri Senator Samuel Dexter LeCompte, but the name “LeCompton” was also associated with a political grouping of southerners in California centered around William McKendree Gwin,) 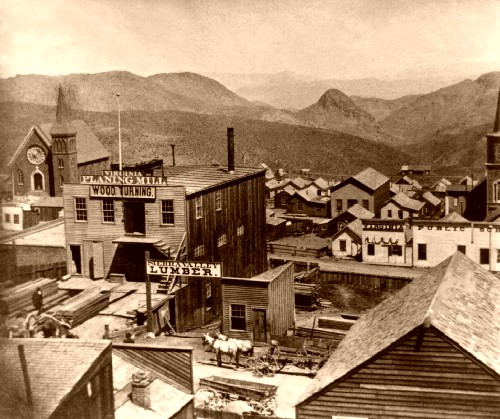 1866
Though his wife Phoebe Elizabeth Hearst (nee Apperson) lived in San Francisco, George spent the first Comstock boom living much of the year in Virginia City where he managed his claims and hired himself out as a mineral guru, widely consulted for his shrewd assessments of mining prospects.

Smartly, just before 1866 and the borrasca (low productivity – the opposite of bonanza), George diversified his millions, buying real estate.  He purchased vast land holdings along the central California coast, as well as sizable tracts in Texas and Mexico.