Sam’s article “More Ghosts” Jan 1, 1863 sets out to debunk the stories about a haunted hotel that had staged apparitions, ominous footsteps and groans, and the miraculous materialization of “large gouts of fresh blood” in “a real, old-fashioned haunted house. But it eventually concedes that ghost may be real, and recommends that people see for themselves. This could be planting a seed in his mind to do the same but with action scenes outdoors in one of the suburbs’ watering stations.

A “repent ye sinners” stagecoach traveling between the coast and Salt Lake City. one guy lives in the cab, rides in the day. he’ll stop at a farm or a tent pile and scream at people for going to hell, for not preparing for the redemption. then he always asks for a drink. a jug is presented, he asks if it’s whisky, they say it’s water, he flinches, swigs. he then tells the crop price changes, “turnips are up 2 cents, potatoes down 1 cent.”

Actor: Lotta CrabtreeThe Crabtrees moved again and set up another boarding house, this time to Rabbit Creek, forty miles north. Soon after, Lotta made her first professional appearance at a tavern owned by Matt Taylor. She began touring throughout California, and Nevada, making a name for herself as a dancer, singer, and banjo player in the mining camps. In 1856, the family moved back to San Francisco. By 1859, she had become “Miss Lotta, the San Francisco Favorite”.Lotta’s mother served as her manager and collected all of Lotta’s earnings in gold and carried it in a large leather bag. When this became too heavy, it was transferred to a steamer trunk.
Lotta Mignon Crabtree (November 7, 1847 – September 25, 1924) was an American actress, entertainer and comedian.
Born Charlotte Mignon Crabtree in New York City to British immigrants,Lotta Crabtree would go on to become one of the wealthiest and mostbeloved American entertainers of the late 19th century. From herbeginnings as a 6-year-old until her retirement at the age of 45, sheentertained and was named “The Nation’s Darling.”

Her father, John Ashworth Crabtree, a book seller, left for San Franciscoin 1851 to join those seeking fortune in the California Gold Rush.Lotta and her mother followed two years later, joining John in theboomtown of Grass Valley.While in Grass Valley, the Crabtrees ran a boarding house. Lotta soonattracted the attention of a neighbor, the dancer and actress Lola Montez, who encouraged Lotta’s enthusiasm for the performance.
The Crabtrees moved again and set up another boarding house, thistime to Rabbit Creek, forty miles north. Soon after, Lotta made herfirst professional appearance at a tavern owned by Matt Taylor. Shebegan touring throughout California, and Nevada, making a name for herself as a dancer, singer, and banjoplayer in the mining camps. In 1856, the family moved back to SanFrancisco. By 1859, she had become “Miss Lotta, the San FranciscoFavorite”.
Lotta’s mother served as her manager and collected all of Lotta’s earnings in gold and carried it in a large leather bag. When this became too heavy, it was transferred to a steamer trunk. 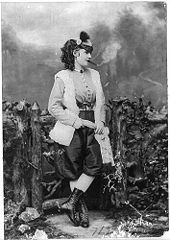 Having made a name in California, in 1863 Lotta left to tour the east coast where she began acting in plays such as The Old Curiosity Shop, Uncle Tom’s Cabin and Little Nell and the Marchioness. With her petite size, she became a favorite for her portrayals of children. By 1875, Lotta was touring the nation with her own theatrical company.
Mary Ann was still managing Lotta’s affairs: booking plays, findinglocations, and organizing troupes of actors. When the steamer trunkbecame too heavy, she invested Lotta’s earnings in local real estate, race horses and bonds. As well as investing, some of the money was used to support local charities and build fountains. Lotta’s Fountain, the most famous of these fountains, still stands at the intersection of Market and Kearny Streets in San Francisco, and is the site of meetings every April 18 marking the anniversary of the 1906 San Francisco earthquake.
Lotta traveled abroad with Mary Ann and her brothers, where shelearned French, visited museums and began painting. After her tourabroad, Lotta returned to San Francisco where she played at the California Theatre, reprising her role in Little Nell and the Marchionessby John Bowen. Having missed her while she was away, the city respondedwarmly to her return and treated her like their very own star.[1]
Lotta’s mother had a 22 room summer cottage built in Breslin Park, awealthy neighborhood at Lake Hopatcong, New Jersey, which was calledAttol Tryst. Lotta gave parties, drove horses, and pursued herpainting. She found life among the elite at Lake Hopatcong rather dull,and the prominent ladies of the time found Lotta rather eccentric. Hertrademark black cigars prevented her from becoming a member of Sorosis,the ladies social group, much to her mother’s chagrin. After Mary Ann’sdeath in 1905, Lotta never lived at the cottage again.

Her career left her little time for romance, and Lotta never married. In 1891, Lotta retired from the stage and settled in New Jersey where she became a virtual hermit. She made one final appearance in 1915 for “Lotta Crabtree Day” in San Francisco at the Panama-Pacific Exposition.

The gravesite of Lotta Crabtree in Woodlawn Cemetery

Lotta later purchased the Brewster Hotel in Boston, where she liveduntil her death in 1924. In her obituary, The New York Times called herthe “eternal child”. She was described by critics as mischievous,unpredictable, impulsive, rattlebrained, teasing, piquant, rollicking,cheerful and devilish. Lotta Crabtree was interred at the Woodlawn Cemetery in Bronx, NY.
Her personal fortune was estimated to $2 million and her estate,worth about $4 million, was left to many charities, which includedveterans, aging actors and animals. The estate ran into complicationswhen a number of people contested the will. It was finally settled and a trust remains for humane and educational purposes of the young.
She was the President of the Professional Women’s Association in New York.

Crabtree Hall, a dormitory at the University of Massachusetts Amherst, is named for Lotta.[2]

__
Biography
Lotta MignonCrabtree was born on November 7, 1847, in New York City to Mary AnnLivesey Crabtree and John Ashworth Crabtree, immigrants from EnglandHer father, who had a bookstore just off Broadway, left for theCalifornia gold fields in 1851. A year later her mother sold the shop,and with little Lotta in tow, bought passage on a steamship to SanFrancisco.

Her fatherdidn’t even meet them at the boat and reappeared only sporadically.Later, when he made off with a trunk of her gold, Lotta tried toprosecute. But the laws of the day gave women no control over theirearnings, so she had to get rid of him by pensioning him off toEngland. Her reputation as a suffragette began to gel.

It was Lotta’smother who swept the stage for nuggets when her 8-year-old begandancing in mining camps. According to legend, when the satchel withLotta’s earnings got too heavy, her mother would buy real estate in thecities where they toured.

Lotta nevermarried. Some said her mother wouldn’t allow it. But the redhead, whomastered the suggestive double entendre long before Mae West, neverlacked admirers. In 1883, The New York Times devoted much of its frontpage to “The Loves of Lotta.”

While besottedyoung men would unhitch the horses from Lotta’s carriage and pull herto the theater, her mother, always dressed in black, would walk thestreets of cities looking for investments.

In New YorkCity, Lotta was the belle of Broadway. “The face of a beautiful dolland the ways of a playful kitten,” purred The New York Times, insisting”no one could wriggle more suggestively than Lotta.”

At 45, she quitthe stage and retired to her New Jersey estate and the library thatprovided her education. Blackballed by a high-minded ladies’ literarysociety, Lotta would only laugh — and shake the skirts that societymatrons thought were scandalously short.

It wasn’t untilher mother died, and Lotta moved to Boston, that her serious sideemerged. She lived alone in a hotel but regularly headed to Gloucester,to paint seascapes, a dog at her feet, a cigar in her teeth.

Following herdeath, at 76, Boston papers recalled Lotta as a devoted animal rightsactivist who wandered the streets, putting hats on horses.
—NewStandard: 1/28/98
The Stage
The miners inthe Sierra of Northern California were used to the loneliness, dirt anddisappointments that came with the search for Gold, but Gold of anothersort appeared in 1853 to ease this routine and her name was LottaCrabtree. The tiny, red-haired, six-year-old jigged and danced to theirclapping hands, while they showered her with nuggets and coins whichher mother hastily collected in her apron. …). Just two doors down from their boarding house, the infamous actressand Countess of Landsfeldt, Lola Montezherself had set up housekeeping. Mary Ann became acquainted with herand soon little Lotta, who adored Lola, became her protégé and wasallowed to play in her costumes and dance to her German music box.
—Lotta Crabtree, Fairy Star of the Gold Rush @Nevada County Gold Online
No Place for a Woman?
The California gold camps were hard on the ladies, but that didn’t stop them from arriving, surviving, and sometimes thriving… It was in Grass Valley that Montez met Lotta Crabtree.

Lotta Crabtree, variety star (1847 – 1924)
The quintessential female entertainer of her time and a true child of the Gold Rush, Lotta Crabtree was raised in California’s gold country and performed in the vaudeville houses of San Francisco. She became the most popular comedienne of her era and the highest paid performer on the Broadway stage.

She clearly invested her earnings, and at age 22 purchased San Francisco real estate to begin a fortune valued at $4,000,000 at the time of her death in 1924. … She retired from the stage in 1892, at 45, but made one last San Francisco appearance at “Lotta Crabtree Day” at the Panama-Pacific International Exposition of 1915. Lotta Crabtree never married, and died in 1924 at her New York home. Charlotte Mignon “Lotta” Crabtree at sfmuseum.org

The New York Times called her the “eternal child” in her obituary. At the height of her career, she was known as “the nation’s darling”. She was described by critics as mischievous, unpredictable, impulsive, rattlebrained, teasing, piquant, rollicking, cheerful and devilish – Attol Tryst by Anna Travers, Mount Arlington Historical Society